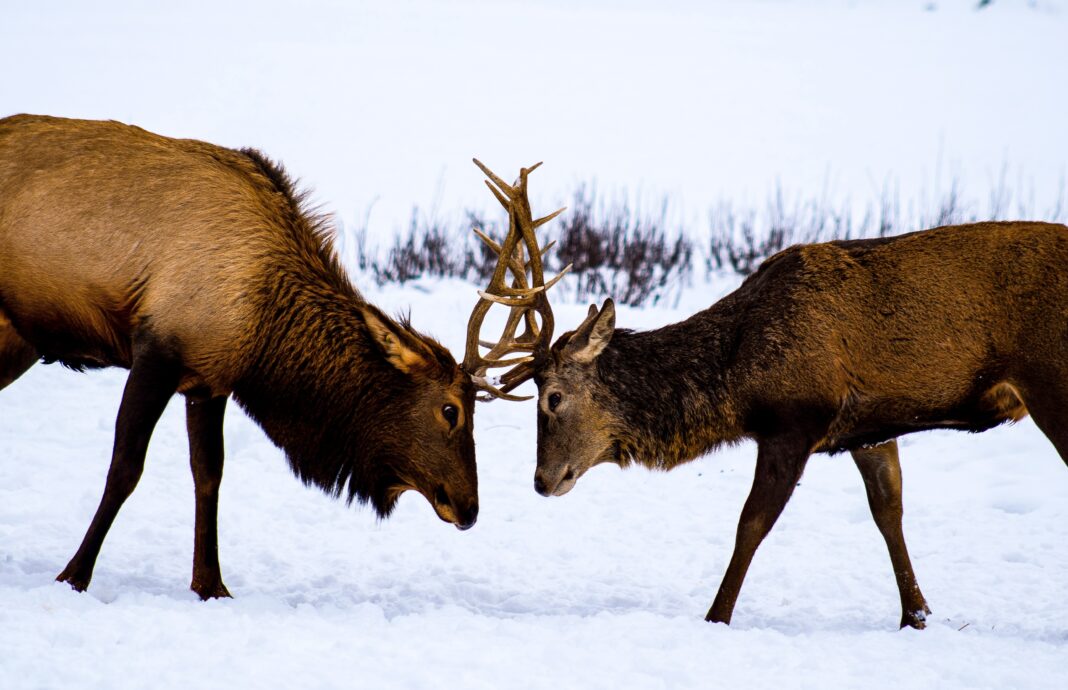 The Elk and Moose are members of a new deer subfamily. These are the heaviest and largest extant species of the family deer. The male of this species of moose has mostly distinctive broad, palmate antlers. While most members of this family (Cervidae) have antlers with a dendritic configuration.

The Elk and Moose belong to the same family and these are different species of that specific family. Their classification along with scientific names and classifications is given here:

Moose is quite different as compared to elk in various physical aspects. These aspects are very helpful to measure the differences between both of them. Some of these useful measures are here:

While looking physically, the moose has a long head with an upper lip and large nose. It has a small tail, small ears, and dewlap that is hanging on its throat. It is very strong because of its very powerful shoulders which are helpful to give him a humpbacked appearance. The male moose has very huge broad and quite flat antlers. These antlers can be easily stretched to almost 4 to 5 feet across.

They are highly adaptive. Their adaptations include special molars, hooved feet, special gut modifications, huge antlers, fur with many unique features, and its sense of smell and hearing. These features are responsible for its survival on the earth and especially in a very cold environment.

What Includes in Its Diet?

Moose are generally herbivores in nature. They mostly prefer to feed on leaves, twigs from trees, barks, and shrubs. According to their name ‘’Moose’’ which means ‘’eater of twigs’’ so they are dependent on green leaves. They cannot eat grass because they are tall and have long heights. That’s why it is very difficult for them to bend down and eat grass from the ground. So their favorite foods used to come from aspen, native willow, and balsam fir trees.

Habitat And Life-Span of Moose

Moose are generally found in the northwest areas of the United States. They are naturally frosted animals. They are seen through Maine to Washington, throughout Canada, and in Alaska. Because of the presence of insulating fur and their very large size, moose are limited to just cold climates. But the ideal and most suitable habitat for moose is in areas with streams, ponds, and frosted areas generally and specifically. The average lifespan of a moose is almost 15 years to 25 years.

Size And Weight of Moose

Moose are generally very large-sized animals. They are considered the largest members of the deer family (Cervidae). According to an average recording, an adult male moose (bull) is almost 6 feet tall at the shoulders. The average weight of the male moose or bull is recorded as as much as 1,400 pounds. On the other hand, female moose are smaller in size and they also have quite less weight as compared to male moose (bull).

Elk are quite different species of the family Cervidae. They have different adaptations, sizes, heights, environmental habitats, physical appearance, and diets. They can be distinguished from moose if we study the physical measurements of the species of moose. Some of these measures are briefly discussed here:

Elks have a dark brown color of their legs, head, and thick head fur. Their short tail and rump patch are in a light tan color while they are seen. Generally, their body can range from pale gray to tan and even brown. They may look brown or tan above and darker underneath. The shades of their body color may vary from season to season. They show a shade of light copper color in the summer months. While they have a color shade of light tan in the winter and spring seasons.

Elks have to adapt themselves in very advanced forms because they have to survive in the very harsh winter season. As they found on mountains and here the temperature falls very quickly so the winter is very severe on the mountains. To survive on mountains they have adopted a very thick fur on their bodies. This fur keeps them warm in the winter season. They are very adaptive about their antlers. If they have damaged their antlers they do not worry because their antlers may renew with time naturally. Their horns may also lose every year and can grow new ones. This process is also natural for them.

What Includes in Its Diet?

Naturally, the elk is a herbivore because it survives by eating green plants, leaves, shrubs, branches, and grasses. They live by eating grasses and forbs in the summer season. They can also eat grasses, shrubs, tree barks, and twigs of trees. Most preferably, they like to eat them in the winter season.

Habitat And Life-Span of Elk

The lifespan of an elk is almost 20 years. But in the case of some other subspecies that may not have some dangers of predators may live 15 years as an average record. For wild species, the average lifespan and living period range from 10 years to 13 years. Elks are most probably found in the Coniferous Rain Forests along with the pacific coast, aspen parklands, sagebrush flats, prairies, eastern deciduous forests, and the Rocky mountains. They may also love to live in the swampy valleys of California. The Elk boreal forests, tundra, and shun deserts.

Size And Weight of Elk

An Elk male ( bull ) can attain its maximum and largest size at the age of 7 years. When they have fully grown they may have almost 5 feet tall height at the shoulders. Their weight may be between 700 pounds to 1100 pounds. The cows are known as the female elks, their weight may fall between 500 pounds to 600 pounds. Their average length maybe 4.5 feet at shoulder height.

As mentioned above in detail, both the species elk and moose belong to the same family. But they have different habitats, environments, and diets. You can easily observe them based on their different physical appearances.

How to Train Dogs for Hunting

How to Use a Spotting Scope