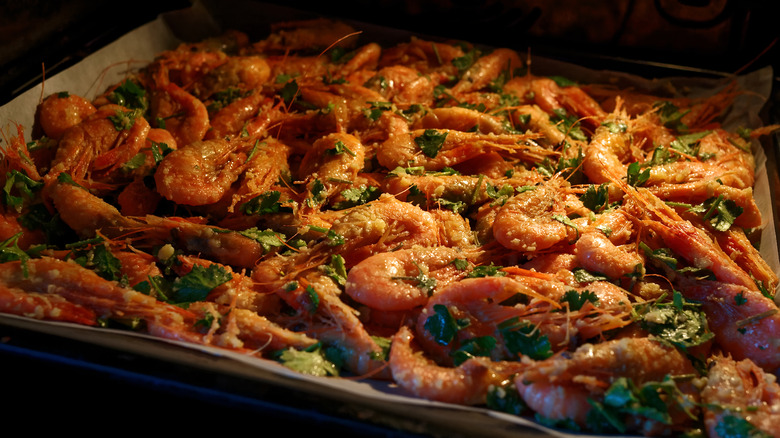 However, many people think that a shrimp boil is one of those foods you shouldn’t reheat because it can be challenging to reheat a shrimp boil. In contrast to chicken or beef, it is quicker to dry out. Additionally, leftover shrimp boil can have an unpleasant texture and smell if not properly reheated. It sometimes has a distinct fishy odor.

How can a shrimp boil be reheated without losing its flavor? In a hot water bath, shrimp boil can be reheated to perfection. To add more flavor, you might substitute stock instead of water. The alternative is to cook the ingredients with foil on top in a microwave or oven. Reheating a shrimp boil at low heat works best.

You may still have this delicious, tasty meal for dinner because it is so mouth-watering. So let’s get started and discover the most effective methods to reheat and store a delectable shrimp boil.

It’s a classic Southern dish made with hearty potatoes, tender shrimp, flavorful sausage, and tasty corn. A wonderful, simple traditional evening meal. It’s packed to the brim with a savory mixture of spices, including a spicy kick that’s hard to resist. And the overall flavor combination is perfectly excellent.

Fortunately, reheating a shrimp boil is just as simple as making one. Reheat only the amount you intend to serve right away. The techniques for reheating shrimp boil are listed below.

Since it only takes a few minutes to reheat, stovetop reheating is incredibly efficient. Additionally, it is simple to complete in a single pot without any mess.

Note: Boiling water should not be used since it is too hot and will overcook the shrimp boil.

You might wonder why microwave heating isn’t the top option for reheating, although it’s conceivably the quickest method. In actuality, overcooking shrimp boil or veggies in a microwave is quite simple. Due to the way microwave ovens cook food, it’s also typical for your meal to have cold areas. Therefore, only use this technique if no other heating options are available.

Note: Shrimp boil that isn’t edible can be avoided using a low power setting and quick heating intervals. The shrimp should rest for ten seconds in between heating rounds. This enables the shrimp boil to absorb the heat uniformly.

Set up your steamer and boil some water in it. If you don’t have a specifically designed steamer, you may make one out of a pot, a colander with a lid.

Note:  Once heated completely, dry the shrimp boil and season it. Otherwise, its flavor is dull and watery.

The ideal method for reheating shrimp boil that is not stored in a boil bag but in a sealed container is in the oven. Additionally, it’s a terrific technique if you’ve kept it right in the casserole dish because you can then simply put it in the oven, avoiding additional dishes.

Put a little lemon juice for taste on the foil packet. If you don’t have any stock, you can use water to keep the shrimp boil from drying up, but it won’t be as tasty.

The major issue with reheating in a skillet is that if you’re not careful, the meat will begin to overcook. This can ruin your delicious flavors or give the shrimp boil a rubbery texture.

The remaining shrimp boil can be kept in an airtight container or a resealable plastic bag. Make sure the shrimp boil is covered and kept in the refrigerator. It can readily last three to four days in the refrigerator if properly preserved. Therefore, consuming the stored food within 3–4 days is advisable before it spoils and gets you ill.