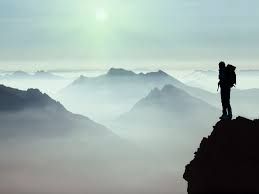 Mountain climbing, commonly known as mountaineering, is a sport that involves reaching or making an effort to reach high points in mountainous terrain, primarily for personal pleasure. Although the phrase is frequently used unofficially to refer to hiking up low mountains with only moderate difficulties, it is actually better reserved for climbing in places where the terrain and weather conditions present enough risks that a certain amount of prior experience will be considered necessary for safety. Mountaineering is a risky sport to engage in if you are unprepared.

Mountaineering is the activity of ascending mountains; it involves overcoming obstacles, showing tenacity, and placing one’s hands and feet on ice, snow, and rock to reach a top eventually. The climber might halt and take in the view of a world dominated by nature and her uncontrolled glory from that vantage point, high above the world of cities and civilization.

Mountaineering, also known as alpinism, is simply tough and strenuous trekking up steep, rocky slopes, talus fields, and along airy slopes dotted with rocky outcrops in the high mountains. There are other aspects to it besides merely using an ice axe, crampons, cams, and rope to climb mountains the hard way.

It is advisable to travel with more experienced friends or a guide if you are a newbie and unfamiliar with the ways of the highlands. You can learn from them what it requires to be safe in the mountains so that you can come back the next day for a brand-new adventure.

The Himalayas, the Andes, the French Alps, Denali, the Canadian Rockies, and the lonely regions of Antarctica are among the highest mountain ranges in the world, and other climbers strive to reach their goal of standing on top ice-bound summits there. These climbers put their lives and limbs in risk in order to ascend one of the world’s highest summits, such as the 14 Asian mountains that rise above 8,000 metres, by facing frostbite, bone-chilling cold, hypothermia, avalanche, and severe winds.

No matter how easy or uncomplicated the peak you choose may seem, mountain climbing is risky, just like rock climbing, and should not be done carelessly. It’s not always what it seems. There is danger and excitement everywhere in the mountains.

Even in a bright blue sky, thunder can hit. You get covered in ice and rain as soon as a thunderstorm forms. Mountain sides are swept down by rockfall and landslides. You might have to tent camp outside if difficulties slow you down. An injury involving you or your climbing companion could result in a variety of issues.

In snowy places, mountain climbing can be hazardous. Each year, people suffer major injuries or even pass away due to falling, being buried under an avalanche of snow, or becoming too cold.

Mountain climbers develop safe climbing techniques to lessen the risks. Additionally, they use ropes, compasses, and first aid supplies in addition to wearing safety gear like helmets. Other tools like shovels, radio transmitters, long poles (for locating persons buried in the snow), and emergency G.P.S. are also brought.

Climbers must be skilled

Even though each of the three components of the sport is hiking, rock climbing, and snow and ice technique—is essential for the entire mountaineer to be proficient in, they are all very distinct. Even the most experienced mountaineers will fall into different levels of each category due to their huge variances. A good climber will find that balance that aligns with their particular talents, approach, and physical and mental capabilities.

Mountaineers must be skilled in all rock and ice climbing techniques, have a basic understanding of snow and glacier navigation, and be able to predict climate in order to climb these mountains. Most importantly, they must have sound judgment and discretion to stay safe and sound.

Many people who would never consider rock climbing and its dangers relish climbing or hiking up mountains across the country. They find their challenges in Colorado’s Fourteeners, or 14,000-foot peaks; Washington’s Mount Rainier; California’s Mt. Whitney; the 4,000-foot peaks of New York’s Adirondack Mountains; or Old Rag Mountain in Virginia’s Shenandoah National Park, among other mountains.

Reward of an effort

The mountains are an attraction for climbers who love the outdoors and have an adventurous mindset. Although it is not always simple, reaching the summit of a mountain peak always feels desirable. The ability to stand at a significant height and see the entire planet through the eyes of an eagle in flight appears to be well worth the effort.

You must be able to take and maintain a correct horizontal stance in order to climb mountains of any difficulty.

Examine the right form for planking to make sure the move is efficient and secure. The benefits of using mountain climbers in your training program will be significantly diminished if you perform a plank incorrectly and run the danger of suffering an injury.

You should avoid mountain climbing if you have any injuries or shoulder instability. Mountain climbing is an excellent exercise for your knees. Suppose you have had surgery in the past or believe you may require it in the future. In that case, you should still speak with your doctor or physical therapist before implementing these exercises into your routine (for example, to fix a sports injury or replace a joint that has been destroyed by arthritis).